They say it’s the little things that matter in life.

Traditionally, the working work has been 9 to 5, Monday to Friday – with the weekend for rest.

For many, that’s a picture they no longer see or experience – especially if they are self-employed.

The VA looking to grow their business might well choose to work evenings or at weekends. The super busy PA or EA may feel they have to do the same, either to keep up or get ahead with tasks.

That would certainly match the picture revealed in a Financial Times article about ‘the truth about weekend working’.

The piece suggested up to a third of the UK labour force works beyond the Monday to Friday norm. Estimates ranged from 24 per cent to 33 per cent.

The article reported how, by most measures, a smaller portion of the labour force worked at the weekend in 2015 than in 2000.

However, the amount of paid work they did was larger. In other words, it represented a bigger proportion of their weekly working time (for those aged 16 and above, from 21 to 26 per cent).

What does this mean for the savvy assistant?

I spoke in a previous blog about the dangers of burnout for VAs, PAs and EAs.

If you’re tearing through each day at 150 miles an hour that’s going to require a lot of mental focus and physical energy. Start adding to that with working evenings and the weekend, and that’s going to have consequences.

If you start overrunning your weekday working by just 15 minutes a day, over five days you will have worked an extra 75 minutes. You can do the maths.

Over one month, that is a minimum extra 300 minutes – or five hours – of work. For which there’s no extra pay.

During a year – assuming you take four weeks’ leave per annum – that’s 55 hours of unpaid toil.

Earning more? You could easily be giving away £2,000-plus every year – just by overrunning your working day by 15 minutes every day.

This is the compound effect working in a negative way. What you really want is to have that working for you in a positive way.

Experience the Compound Effect for Good

You will probably know the term ‘compound interest’ and understand the concept.

At the end of the first month, you’ll have earned interest on the 100 pounds. After month two you’ll have £200 plus the interest on your first instalment and a percentage of the second instalment. Month three, the £300 you’ve put in in total plus three months’ interest on a growing sum. And so on.

The interest is compounded each month because you’re gaining interest on every pound you’ve put in.

The same principle can be applied to time.

Let’s say you’re a PA and serve five executives. Every minute matters because your bosses all want support and focus.

If there’s a daily task you do for each executive that takes five minutes more than it really should, that’s 25 minutes lost out of your day. That’s a couple of hours of unnecessary extra work every week – simply because you didn’t know a better, quicker way.

Now multiply that for a whole year. Do you see how much that PA is losing because of a tiny inefficiency?

Training and experience offer you a powerful alternative.

When you know how to carry out and complete tasks and projects using Microsoft Office 365, you will be confidently able to save time and ease the stress.

Even small savings in time can – because of the positive compound effect – add up to something significant over the months and years.

I remember, maybe seven or eight years ago, there was an assistant at a firm of accountants in London.  One of her jobs was to analyse a big table of data. A repetitive task she had to do for five partners.

Naturally, I wanted to help make her life easier. That’s what I do for people as a Microsoft Office expert. I showed this assistant how to do Subtotals in Excel.

After I had shown her how to use this feature, the assistant said it would save her half an hour for each analysis. One analysis for each partner, so that meant a time saving for her of two and a half hours every day. Over the course of a week, a total of 12.5 hours were saved. More than 50 hours a month freed through one Excel technique.

At the time, I didn’t think it was that amazing but it obviously transformed the way she worked.

It was a little thing with a big impact.

One problem was that each of these reports was written in a different way. There was no consistency. It made the collation and reporting task more time-consuming than it needed to be.

I showed the lady how to use Styles and create a template document for all the reports. It allowed her to take all the different reports and turn them into something that could be presented in a way the NHS (Britain’s national health service) wanted it.

The lady said she was going to save THREE hours every time she did the collation. Because this was a regular task, the compound effect was big for her.

An Investment in Quality Training Will Save You

As the two examples above illustrate, little things can count for a lot. They certainly changed the way the two professionals worked – and gave them back time they had not realised they could have.

That’s what I love about my training.

It allows professional assistants to do more in less time. The more productive you are, the quicker you get through tasks and the easier it is to complete projects to deadline.

It’s why I created online courses for Tomorrow’s VA – The Hub which is where you’ll find step-by-step training in the essentials of Word, Excel, PowerPoint, Outlook and Teams.

And the learning never stops.

It’s why I designed a new programme, aimed more at PAs and EAs, called Microsoft Office Mastery for the Savvy Assistant. Windows 11-ready, covers the classic apps as well as OneNote, OneDrive, SharePoint, Forms, Sway, Office on the Web and Bookings.

The videos in my online training are usually short. That is, little. And, as I’ve illustrated in this blog, a little can go a long way.

Little things do matter. Why not make a little change to the way you work and see the difference it makes.

P.S. I am thrilled to share that I made it to the Grand Finals of The VA Voice Awards* – the deadline runs until 30th April so there is still time if you wish to vote for me. 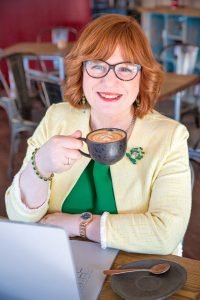